Based on Cutting-Edge, Female-Specific Scientific Research

Most of the popular "diet and exercise" programs you see on line and on TV were designed with outdated research that was focused on only men, not women.

That’s because female-specific research is difficult to find. Why?

Because studying humans is complicated. And researchers thought studying males would be "simpler". They don’t have menstrual cycles, they don’t get pregnant and they don’t go through menopause. Oh boy, what a mistake.
You may have to re-read these next few points as they are shocking:
No wonder women have been frustrated by so many programs that have failed them.

However, with these recent changes, it should be no surprise there is now a growing body of evidence that a woman’s body works completely different from a man’s.

But what is surprising is we’re finding women have a huge metabolic advantage.

That’s why Metabolic Renewal takes all of this research (and common sense) into account and is designed to help you tap into this unique advantage.
Finding #1
Women Burn 65% More Fat Than Men
Both women’s and men’s bodies have 2 main choices for fuel during exercise: fat or sugar. When men exercise they tend to burn more sugar and less fat.

A 2002 study in The American Journal of Physiology, Endocrinology and Metabolism found during exercise, women burn an average of 65% more fat than men! 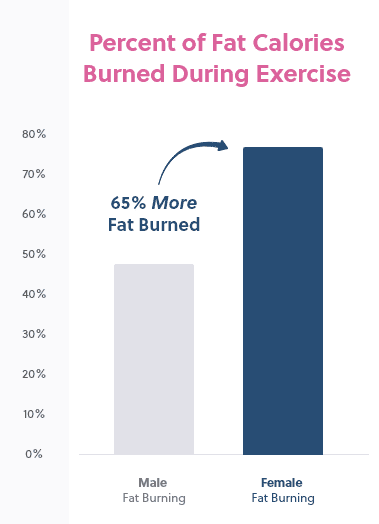 However, that’s just the beginning of the good news. If you work out the right way, using the intelligent exercises in Metabolic Renewal, you can make that benefit even bigger.
Finding #2
Women Create Nearly 2X More Fat Burning Hormones Than Men
The female metabolic advantage is due in large part to Human Growth Hormone (HGH).

HGH is a hormone that naturally burns fat and sculpts lean muscle. And it has a particularly powerful effect in women.

But unlike what testosterone does in men, HGH won’t leave you looking bulky. It helps develop a shapely feminine physique. 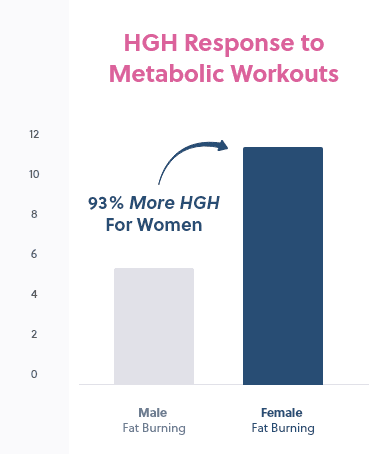 A 2014 study published in the Journal of Strength and Conditioning Research found women generate 93% more HGH than men.

To find out, scientists recruited a group of women. Half of the women did a hard-core traditional workout with weight lifting, squats, and exercise machines… and then made them run on a treadmill for 20 minutes! 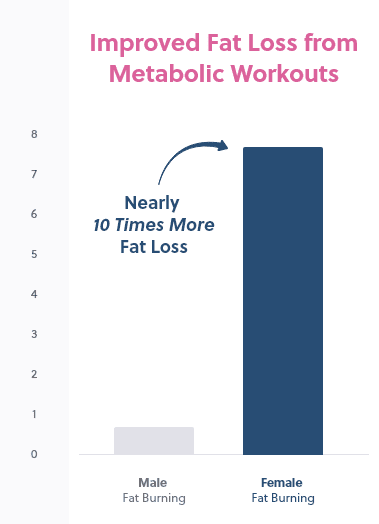 The other half did a series of short, fast, intelligent workouts (like those found in Metabolic Renewal) that only took half the time.

After 11 weeks, they were astonished at what happened to the women doing the intelligent workouts:
That means the women doing the super-efficient intelligent workouts lost almost 10 times more fat than the women busting their butts in the gym twice as long.
Contact Us Privacy Policy Terms & Conditions Terms of Sale
© 2020 Metabolic Renewal by Natural Health Sherpa LLC | 1121C Military Cutoff Road, #360 Wilmington, NC 28405
Disclaimer: The information on this site is not intended or implied to be a substitute for professional medical advice, diagnosis or treatment. All content, including text, graphics, images and information, contained on or available through this web site is for general information purposes only. Natural Health Sherpa LLC makes no representation and assumes no responsibility for the accuracy of information contained on or available through this web site, and such information is subject to change without notice. You are encouraged to confirm any information obtained from or through this web site with other sources, and review all information regarding any medical condition or treatment with your physician.